Celebrating your wedding anniversary is an important part of maintaining a successful relationship. Fourteen may not sound like an important number, but you can bet your bottom dollar your wife will be hoping for a gift.

It’s probably safe to assume you’ve found your way here because the ideas are slow in coming. Don’t panic, because we’ll be able to get your creative juices flowing with some memorable 14 year anniversary gifts for her. As with all the other anniversary years we’ve been looking at, a number of themes are linked with such an occasion. And because we want to help we’ll happily share them.

14th Anniversary Gift Ideas for Her

Rather than suggest you buy your wife something made from ivory, we prefer to say the theme is gifts inspired by ivory. After all, there is a lot of controversy, and rightly so, over the sale of ivory. Ivory has been traded for hundreds of years, but in more recent times the ivory trade has led to the endangerment of species, which in turn has resulted in restrictions and bans. Ivory was in fact, once used to make piano keys, but in the 1970s the piano makers abandoned its use as a key covering material. Today, international trade in ivory is banned, and has been since 1990, although there is still a heated debate going on.

As you can now see a gift made from ivory is very tricky, and if you or your partner are concerned about animal rights you could make a donation to an elephant charity. Or you could book an African safari to see the majestic creature in the wild. Alternatively give your wife a carved elephant or simply an ivory colored gift.

And what options are there if you prefer to be a bit more modern in your gift thinking? Gold jewelry is the modern alternative that forms part of a list drawn up by the librarians at Chicago Public Library. A pretty self explanatory gift idea, and if your wife loves gold jewelry this is a perfect option. Gold bracelets, necklaces, earrings, and rings will make a stunning 14 year wedding anniversary gift for her. And if you want your gift to combine her love of flowers and the modern theme, consider the gift of a jewelry set that has been made using miniature rose petals, glazed and trimmed with 24 carat gold.

The native home of the dahlia is Mexico, which goes to explain why it was chosen as the national flower in 1963. It is known for being a symbol of commitment, elegance and dignity. Fitting qualities that match a marriage when it has reached its fourteenth year. If you feel that your marriage has these in abundance, then the gift of an anniversary dahlia, or better still a whole bunch of them, will be the perfect answer.

Dahlia plants produce an abundance of flowers from July until the arrival of the first frosts, so they can be a long lasting reminder of your fourteenth wedding anniversary. There are so many different colors and types, you’re bound to find one that suits your special lady. Colors include salmon pink, yellow, apricot, crimson, orange, lavender, and scarlet. The varieties include those with double blossoms, or with pointed, spiked, or rounded petals.

Such a colorful bloom makes wonderful flower arrangements. Send a bouquet to your lady while she’s still at work, and her mates will be green with envy. If your lovely lady isn’t known for her plant care skills you could choose to give her a bunch of dahlias made from silk. Or how about a photograph or painting featuring the dahlia, as it will be an anniversary gift to last a lifetime.

In the Middle Ages, opals were considered a very lucky stone to have in one’s possession. This is because it was believed to hold all the qualities of every gemstone whose color was represented in the stone. When wrapped in a fresh bay leaf, and held in the hand, it was also believed to give the bearer the power of invisibility.

Later on in its history, the opal took on a far less pleasant meaning. Sir Walter Scott published a novel in 1829, called Anne of Geierstein in which one of the characters wore an opal talisman with supernatural powers. Should a drop of holy water fall on the stone it would turn into a colorless stone and the wearer would die shortly after. The novel was very popular at the time, and many people associated the opal with bad luck and death. In just 12 months, the sale of opals in Europe dropped by 50%.

It has, however, regained its popularity, and is now the birthstone for people born in October.

Now you’re armed with a few fourteenth wedding anniversary gift ideas for your wife you’re all set to pick one that suits her. Bear in mind her preferences, style and taste and your gift will be remembered. At least until next year when you score big once again. We’re also going to be featuring 15 year wedding anniversary gift ideas for her, so mark our site as one of your favorites, and come back in a few months time.

More gift ideas for other anniversaries 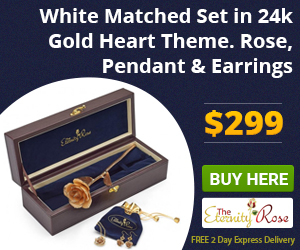